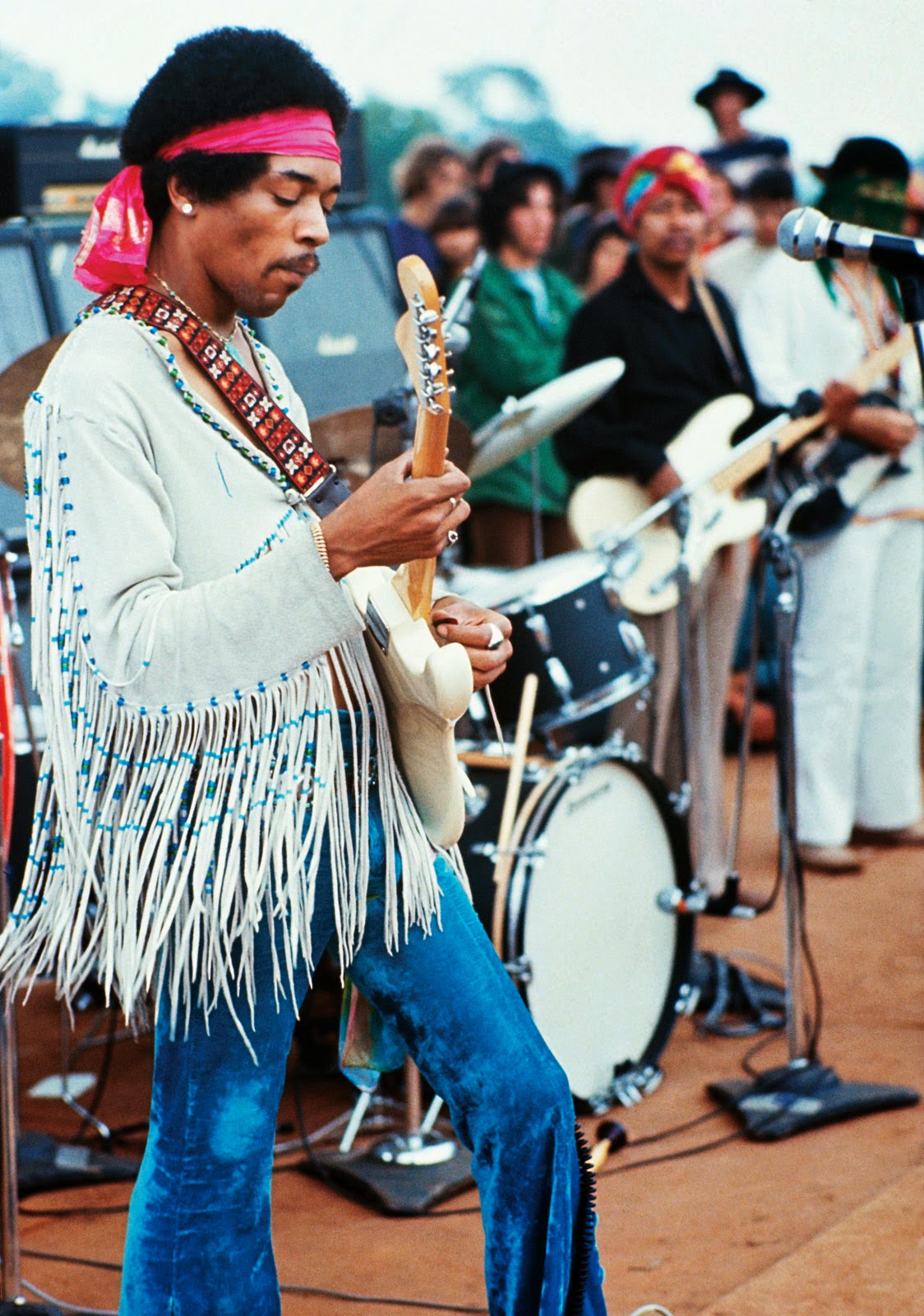 When one thinks of Jimi Hendrix's rendition of "The Star Spangled Banner," one instantly thinks of Woodstock, the concert that defined the generation of the counterculture.  Woodstock was a three-day concert event that touted communal living, peace, free-spirit, and, above all else, music.  There were numerous performers, but the one that really defined Woodstock was Jimi Hendrix, who closed the show.  Hendrix performed on Monday morning, delayed due, in part, to inclement weather.  In fact, his audience was small in comparison with the throes of youngsters who had stayed through the weekend.   Over half a million people had been in attendance during the event's peak, but only about 30,000 were there when Hendrix took the stage. Even as Hendix played, the audience continued to thin, as people had weekday commitments and real lives to return to.  But those who stayed heard a version of "The Star Spangled Banner" that would become a symbol of a generation.

It is interesting to note that Hendrix rendition was not planned.  Hendrix even admitted to the crowd just before breaking into that song: “You can leave if you want to. We’re just jammin’, that’s all.” The song was an impromptu jam session, but it really meant so much more to so many people, including Hendrix himself.

The Hendrix version of "The Star Spangled Banner" was representative of the time.  It not only highlighted the reactions to the perceived immorality of the Vietnam War as a protest song, but it appropriately broke from tradition.  If we think about the concept of a "counterculture," it implies just that - a break away from traditional norms, values, and expectations.  Hendrix did that and so much more by playing his own artistic version of the traditionally American anthem.  Aside from the obvious war references, including the sound of bombs falling, fighter jets overhead, people screaming, and the infusion of Taps, the song represented a break from tradition because it was not played traditionally.  No one had thought to do this before Hendrix.  Whether or not you like the interpretation, it cannot be denied that Hendrix made a statement about the sociopolitical atmosphere of the time that goes way beyond that of an anti-war statement.

For Hendrix himself, the song appropriately made another statement - that of Civil Rights.  Jimi Hendrix was a very successful African American rock singer who had been backed by an all-white band, the Jimi Hendrix Experience, which had recently broken up and was playing for the first time with his new, mixed-race band, Gypsy Sun and Rainbows.  Hendrix included black performers, bassist Billy Cox, guitarist Larry Lee, and percussionist Juma Sultan in the new ensemble he called his Gypsies.  Hendrix also performed songs from his early years, songs including Gypsy Woman and Aware of Love, which were written or co-written by Curtis Mayfield, with whom Hendrix had performed with in the early 1960s. It was the only Hendrix concert that included these songs. It would seem that Hendrix wanted to point out that he was a successful rocker, but also that he was African-American.  "The Star Spangled Banner" performance only served to highlight this point.  Hendrix himself even drove that point home when interviewed about his rendition of  "The Star Spangled Banner" on Dick Cavett a few days after the performance:


“I don’t know, man. All I did was play it. I’m American, so I played it. I used to sing it in school. They made me sing it in school, so it was a flashback.” Cavett interrupted the interview to point out to the audience, “This man was in the 101st Airborne, so when you send your nasty letters in …” Cavett then explained to Hendrix that whenever someone plays an “unorthodox” version of the anthem, “You immediately get a guaranteed percentage of hate mail.”

Hendrix then respectfully disagreed with Cavett’s description. “I didn’t think it was unorthodox,” he said. “I thought it was beautiful.”

Hendrix underscored the fact that he played the song because he was an American.  In that instance, Hendrix explained so much in so few words as did his artistic rendition of an American anthem.

Posted by History thru Hollywood at 9:02 AM